The tournament is make up on teams of mixed boy’s and girl’s teams consisting of minimum of 8 players, played in pools of 4 teams with the top 2 teams from each group advancing to the quarter final stage

On Wednesday 3rd October 14 schools with 19 teams ascended on Ashby RFC to take part in a tag rugby event.

The pool stage featured 36 matches in across 4 pitches and were excellently officiated by young leaders from Ashby and North West Leicestershire School Sport Partnership staff.

The quarterfinal line-up featured some tight games. With Willesley A vs Donisthorpe B (6-1), Hill Top vs Griffydam (8-5), Snarestone vs St Charles (3-6) and finally Donisthorpe A vs Willesley B going to extra time to finish (7-6)

The action only intensive in the Semi-finals when both games were won by a single point.

Donisthorpe A vs St Charles 6 – 7 in extra time.

The final between Willesley A and St Charles was a very tight game until the second half when Willesley managed to secure a few quick tries to take them ahead and keep them ahead. Final score was 9 – 4 to Willesley

A massive thank you to Ashby RFC for allowing us to use their facilities for this event, Ashby School for providing fantastic officials for the event. Without their support, we would struggle to hold a 19 team tag rugby event.

Spirit of the game went to Newbold for never giving up, always cheering the opposition teams on great play and being honest and respectful of all teams within their pool. They were selected by the young leaders on their pitch.0

On Thursday 4th October 12 schools with 16 teams ascended on Coalville RFC to take part in a tag rugby event.

Due to the number of teams present at the tournament today we were able to run a partnership first of a trophy and plate competition. This meant that the top 2 teams from each pool went into the trophy quarterfinals and the bottom 2 teams when into the plate quarterfinal.

The Semi-finals were against Woodstone A vs Broom Leys A (6-4) and Hugglescote Vs Whitwick St John A (3-7).

The final between Sir John Moore vs Ellistown was a first meet up at rugby for both teams in a final ended in a tight 4-6 win to Ellistown.

A massive thank you to Coalville RFC for allowing us to use their facilities for this event, King Edward VII Science & Sports College for providing fantastic officials for the event. Without their support, we would struggle to hold a 16 team tag rugby event.

Spirit of the game went to Woodstone for never giving up, being honest and respectful and determined to keep going even when they lost all their games. They were selected by the young leaders over a number of pitches.

The game had attracted a small crowd who cheers both teams throughout the game.

The first half was a very even contest battle with both teams scoring try’s up and down the park. Whitwick St John were winning 7 to 5 at the end of the half

During the second half the try battle continues with both team finishing the game on 12 – 12.

The referee informed both teams that as this was a final and the score being drawn that they would play extra time. If at the end of extra time both teams were still even we would go to golden time. This means that the once extra time finishes the next team to score wins the game and the game is then over.

Willesley started with the ball and scored within a minute. This was met back up with Whitwick scoring as soon as they restated. At the end of extra time both teams were still even on 3 – 3.

The clock continued into extra time with both teams scrabbling for possession of the ball in an attempt to score. Whitwick were able to regain possession after a Willesley knock on and were able to fly around all the defenders and just make the last try of the game. The final whistle was called from the side line signalling an end to golden time.

Both Willesley and Whitwick showed true spirit of the games values throughout the game and should be proud of the performance they put it.

Shane Fox from Principle Wills and Principle Financial Services presented the trophies to both teams. 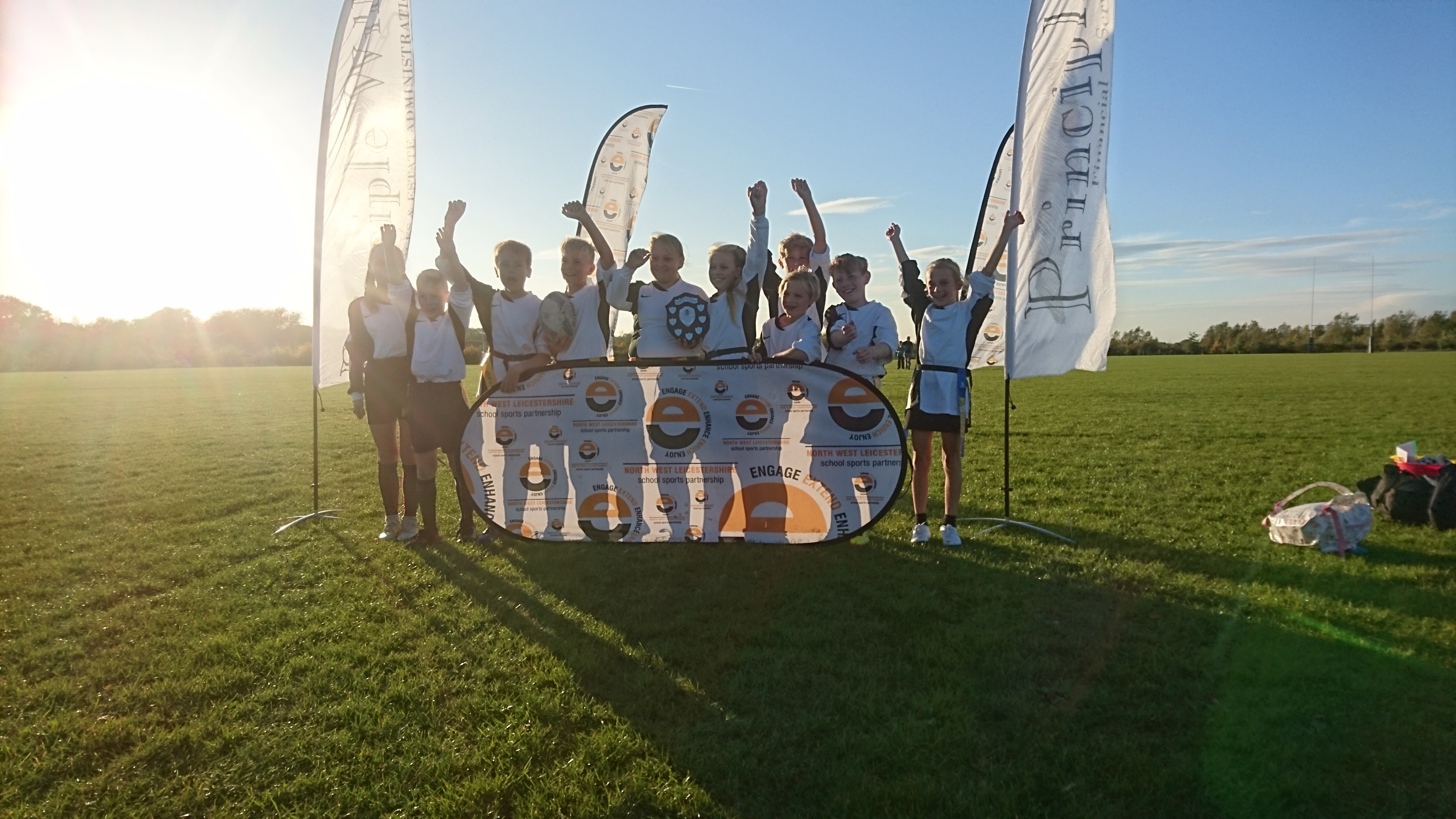 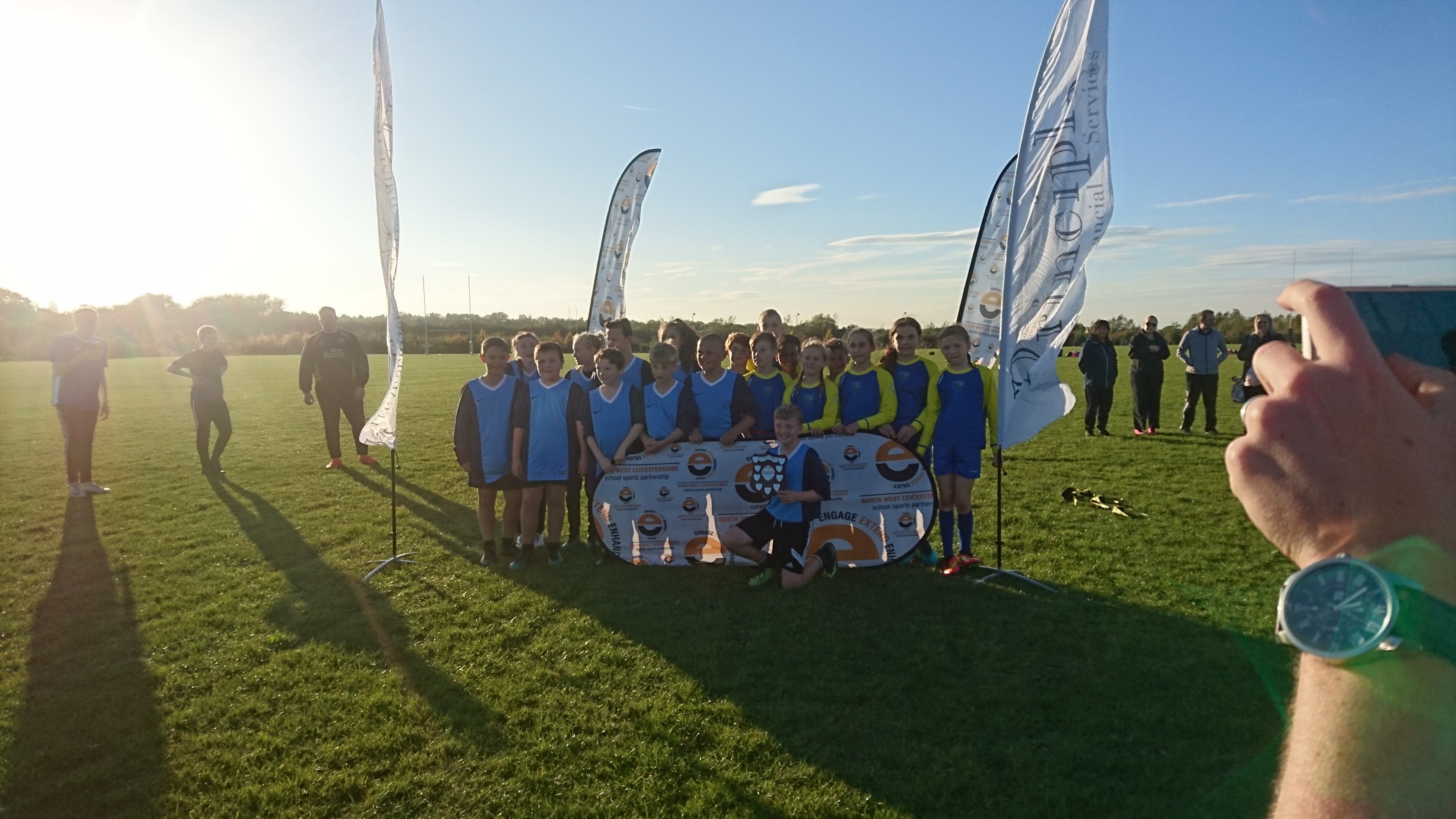 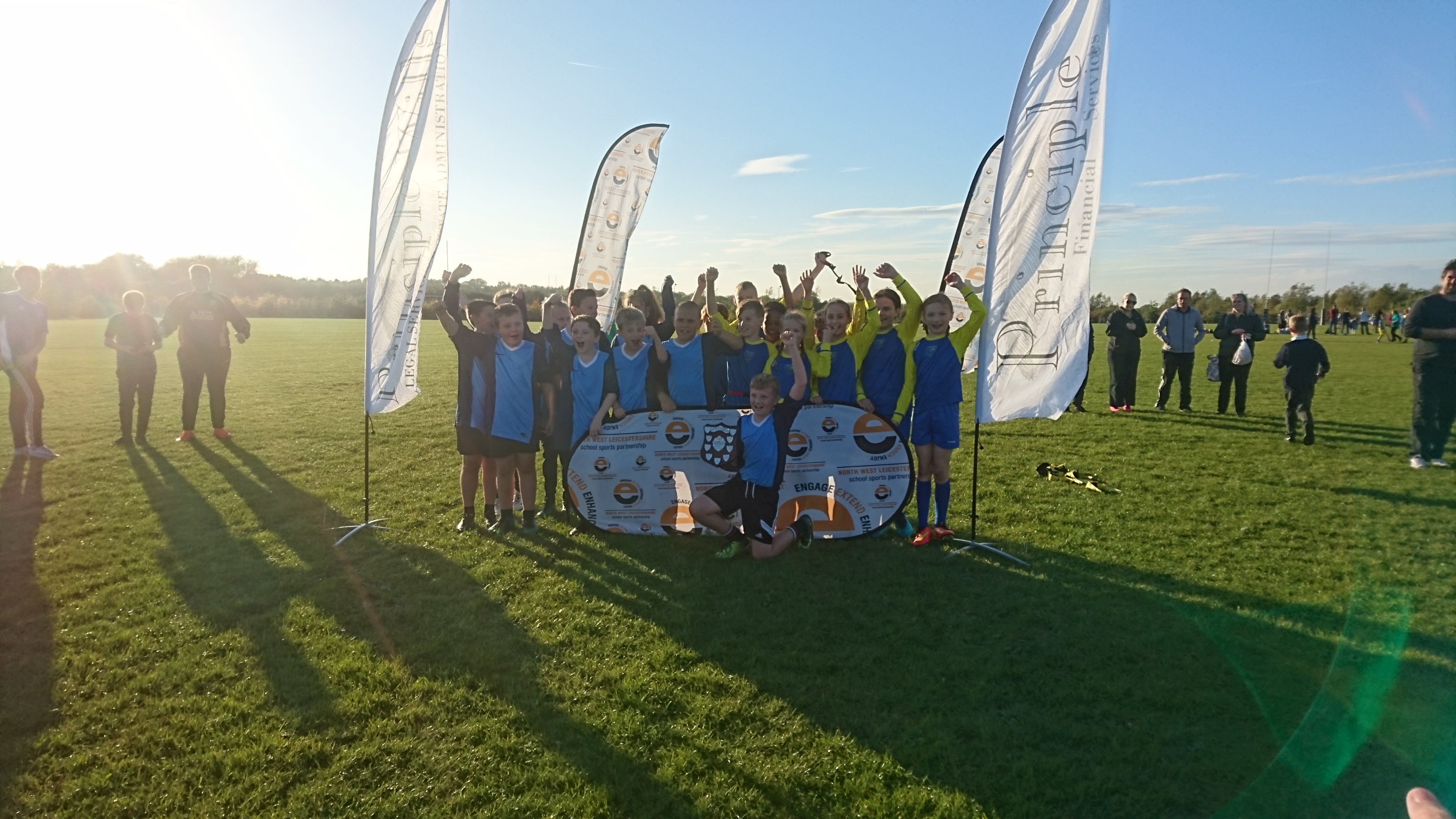 Finalists – Whitwick St John A and Woodcote A (Coalville RFC) 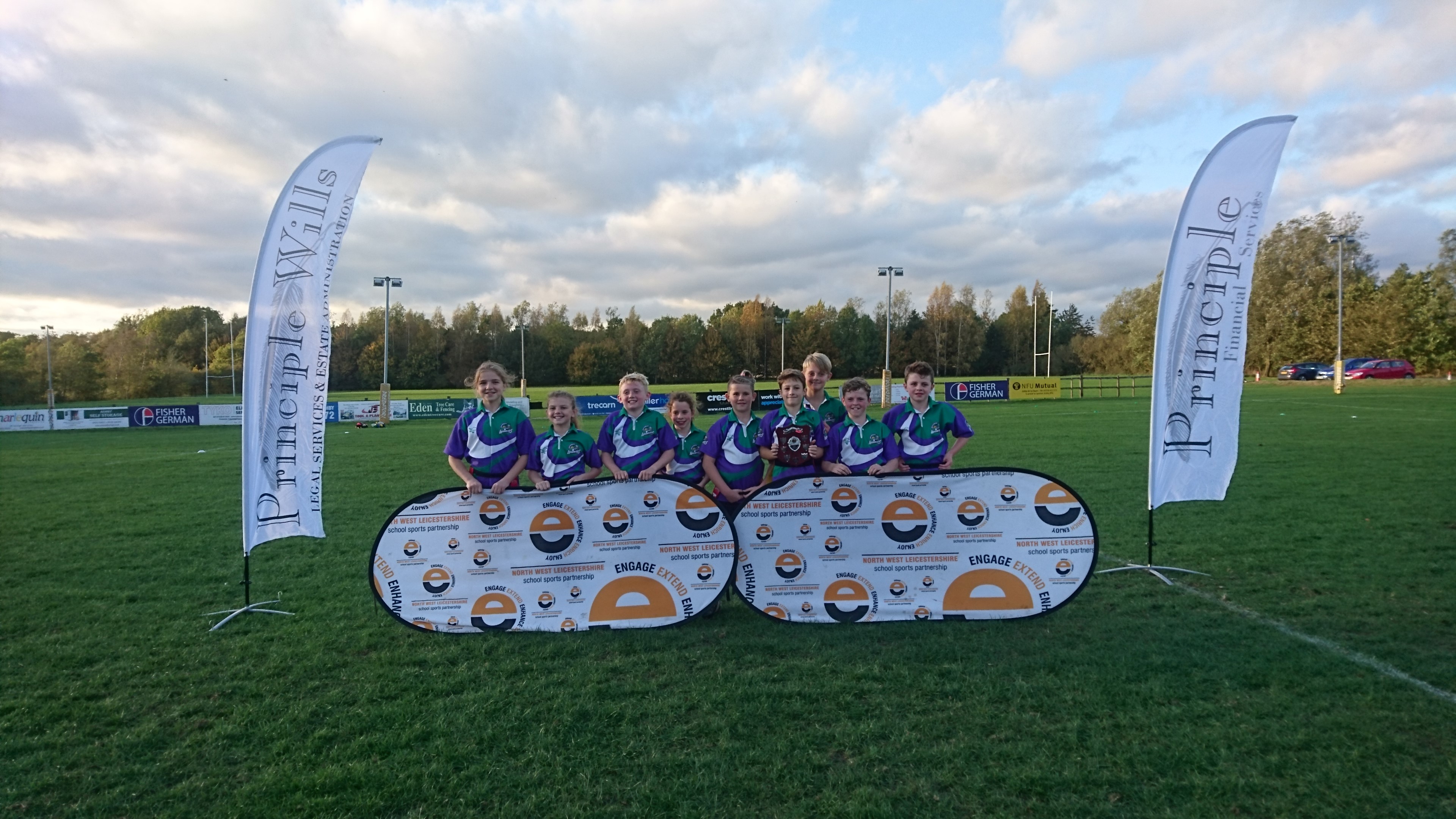 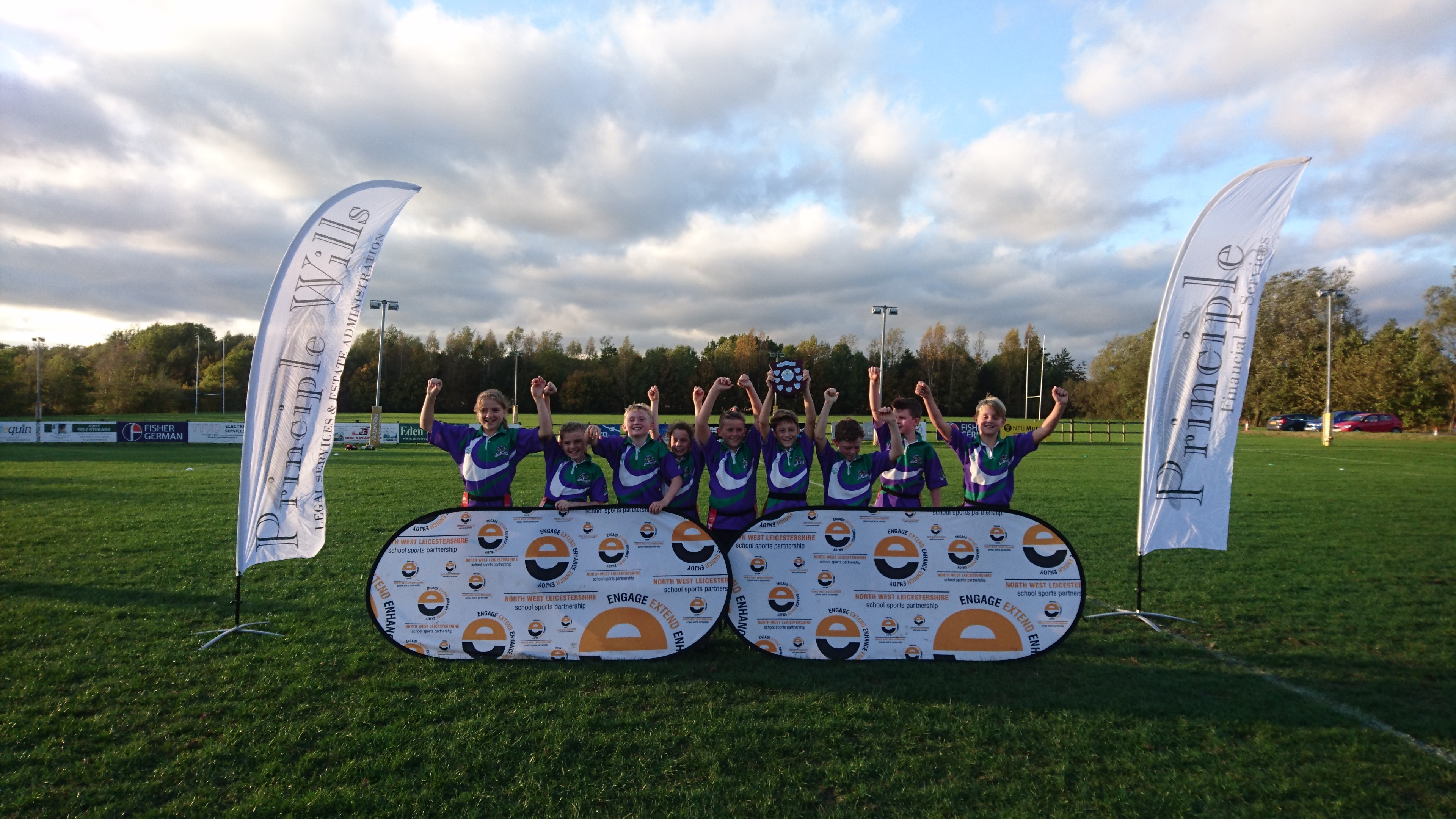 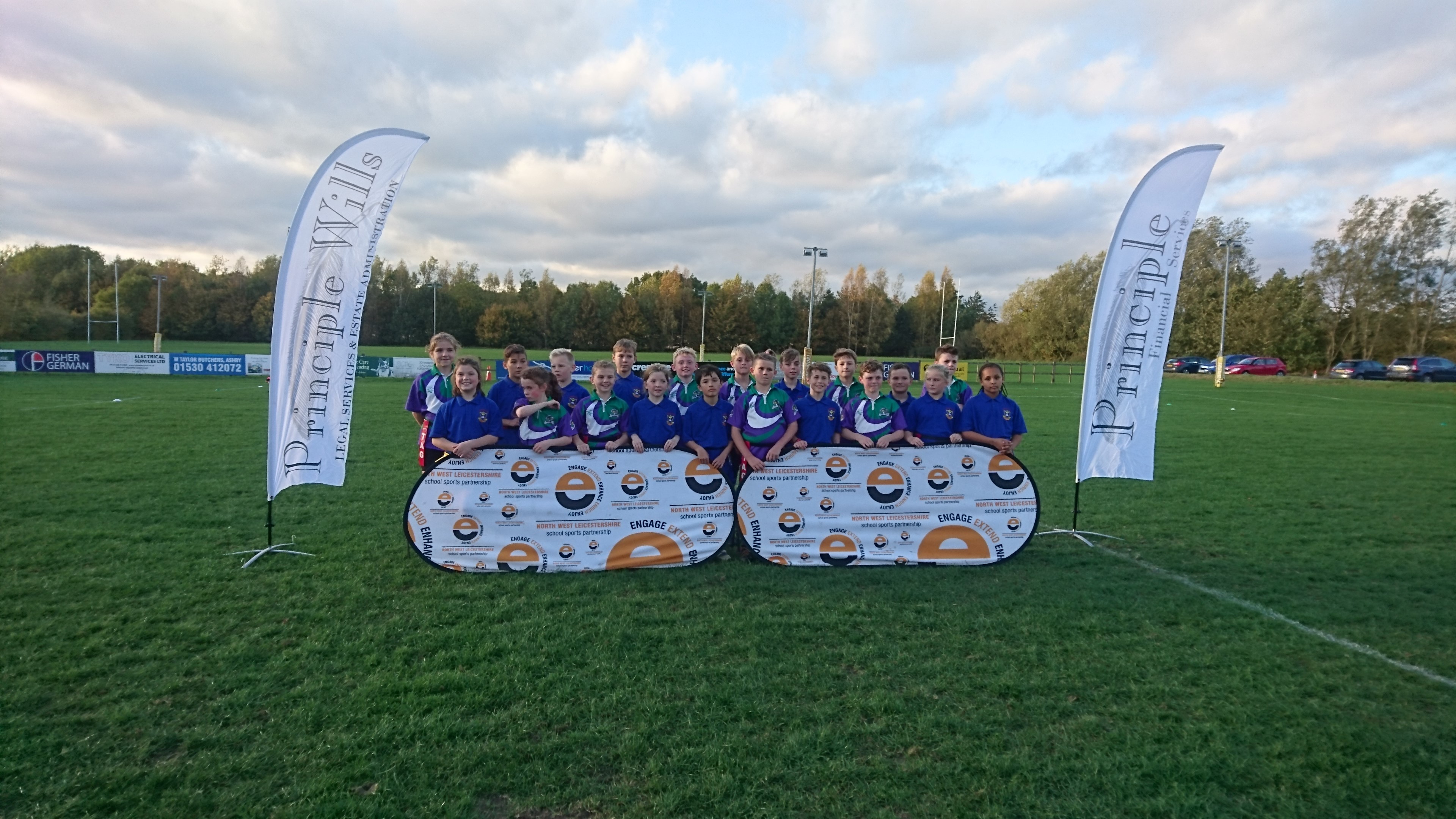