On Wednesday 17th May the great storm rages outside while everyone eagerly awaits to find out if the 2017 Go-Ride Cycling competition will go ahead the following day. The storm, which had already claimed the Yr5/6 Tennis competition at Ashby, continues to pour on the King Edward field. After many field inspections the decision was made for the competition to proceed as planned with fingers crossed that the weather would be on our side.

The following day the sun was beating down drying the field quickly and Dean Hughes from British Cycling was at the venue setting up the course from 8am. With 10 teams competing over the course of the day excitement was high among the children, leaders, parents and staff in attendance. 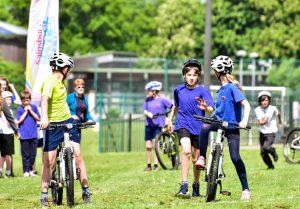 Go-Ride Cycling, in its 2nd year on the NWLSSP calendar, was well attended yet again this year with 10 teams from seven schools competing. A Go-Ride competition consists of two races on different styles of course which will test a team’s cycling knowledge, gear changing ability, balance, teamwork and stamina. The first course (Cyclo Cross) involves cyclists maneuvering their way through a series of hills and chicanes before tagging their teammates in a relay style format. Next was the Italian Pursuit, which takes place on a velodrome style oval grass course and involves schools completing the course together directly against an opponent. After each lap, the first rider leaves the race leaving a single rider to finish the course.

The morning session saw boys and girls in five teams from Packington, New Swannington, Griffydam and Warren Hills gear up with bikes and helmets to pedal it out for a chance to represent North West Leicestershire School Sports Partnership at the Level 3 County event.  After the first race the scores at the top were very close with only 3 seconds separating Griffydam and Packington which could easily be overturned in the Italian Pursuit. Directly facing each other in the Italian pursuit the two leaders battled it out for a chance to lead at the halfway point of the competition. Packington were able to push on in the later stages of the race and open up a commanding lead heading into the second session. A special mention to New Swannington for winning the Spirit of the Games award for the Go-Ride cycling as they impressed both SSP staff and leaders with their determination to finish the race strong despite a setback early I the race.

Five teams of six children from Snarestone, Willesley and Albert Village primary schools descended upon the sports field at King Edward VII College Coalville for the afternoon session as the sun continued to shine. After 3 laps of the first race Snarestone had opened up a commanding half a lap lead, however Willesley began to slowly chip into the lead and finally managed to take the lead on the final lap to record the fasted time of the day with a very impressive 8 minutes and 33seconds. Willesley continued their impressive cycling in the second race by setting their second record of the day winning with 20 seconds to spare over the rest of the field. The next three teams all finished within 10 seconds of each other in the battle for 2nd place overall.

The North West Leicestershire School Sports Partnership would like to thank King Edward VII College for hosting the event and providing such brilliant leaders along with Dean Hughes from British Cycling for running the competition and providing the bikes and helmets. Without the continued support of British Cycling and schools, we simply would not be able to run this completion.

Congratulations to Willesley for winning this year’s event and good luck in the next round.