The weather was a big talking point as 4 Quicksticks hockey events took place over the last fortnight.

Fog was the main feature as the year 5/6 events took place on Wednesday 11th April at Ivanhoe College and on Thursday 12th April at King Edward VII College. 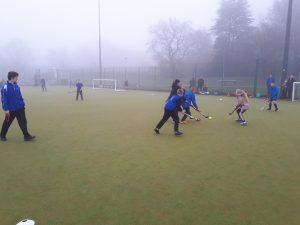 The semi-finals included the 4 group winners after they all secured wins in their respective quarter-finals. Ashby Hill Top A then overcame Heather A with an impressive 8-0 whilst the other semi-final saw a close all-Willesley tie finish 2-0 to Ashby Willesley A. The final was high quality all round but it was Ashby Hill Top who took the title with a 3-1 win.

Albert Village took home the Spirit of the Games award after the positive attitude their teams showed in reaching the quarter-finals.

The second day of the competition saw 18 teams battle it out to win the competition and book a NWL final against Hill Top. The schools taking part were All Saints, Broom Leys, Holy Cross, Hugglescote, New Swannington, St Charles, Thringstone, Warren Hills, Whitwick St John and Woodstone. They all showed impressive commitment throughout the event and played with smiles on their faces despite the continued poor weather!

There was an upset in the first quarter-final as group 4 runners-up Thringstone managed to beat group 1 winners St Charles on penalties. The other 3 group winners made it through with both Hugglesote and Whitwick St John beating teams from their own school to progress.

Hugglescote A made it to the final with a 1-0 win over St Charles whilst Whitwick St John A also progressed after defeating Broom Leys A 2-1. Hugglescote then won the final 2-0 to win the competition having only conceded 2 goals in the day. Thringstone showed impressive levels of determination throughout the day and were rewarded with the Spirit of the Games prize. 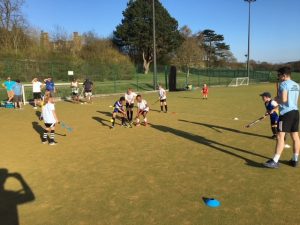 The weather could not have been more different as the teams met for the start of the year 3/4 competition this week. There was glorious sunshine and sun cream all round as the teams headed to  Ivanhoe for the first event.

In the final Griffydam played particularly well as they secured a 3-0 victory. Despite losing the final, there was some success for Ashby Willesley who secured the Spirit of the Games award for their determination and teamwork.

For the final event on April 19th, again the weather was on our side as there was not a cloud in the sky. Sunshine and plenty of smiles, creating a positive atmosphere.

In group one, Whitwick St John A took the leading spot, with Ellistown as the runners up with both progressing to the Quarter-Finals. In group two, Broom Leys A finished first and Whitwick St John B as the runners up. Looking into group three, Warren Hills A took first place in their pool, with Broom Leys B securing a runners up spot. In group four, New Swannington A secured a first place, with Woodstone B securing a second place position. Whilst Holy Cross A and Thringstone were particularly unfortunate not to progress to the knock out stages.  The other teams to miss out were New Swannington B, Holy Cross B, Whitwick St John C, Woodstone A and Warren Hills B but nevertheless, the teams all played fluently with the upmost respect for each other and the officials, well done to all.

The 8 teams who progressed to the Quarter-Finals were swiftly shortened to 4 as Whitwick St John A, Broom Leys A, Warren Hills A, and New Swannington A all progressing to the Semi-Finals.

The Semi-Finals were extremely close, with the teams playing out draws in both games. One was then settled in extra time whilst the other went all the way to penalties. New Swannington A were able to score in extra time, to record a 2-1 win against Warren Hills A. In the other game between Whitwick St John A and Broom Leys A, the teams were tied at 1-1, even after extra time so it took penalties to separate them. Whitwick St John A were able to take the win and progress to the final.

The final stage of the tournament saw Whitwick St John A and New Swannington A go up against each other, and although the sun was still beaming down on the players, it did not affect their performance as both teams were able to hold up a strong line of defence and attack when necessary. The game progressed to extra time as the teams could not be split from a 1-1 score line, however after extra time the score became 2-1, in the favour of Whitwick St John A seeing the team win the competition.

The Spirit of the Games award went to Woodstone for their sheer determination and respect they showed to the opposition.

A massive THANK YOU to all who attended and competed at the events, everybody played thoroughly well and seemed to enjoy themselves whatever the weather! Thanks too to Ivanhoe College and King Edward VII College for the use of their facilities for the competition and to the superb young leaders from Ivanhoe, King Edwards, Ashby who officiated at the events. 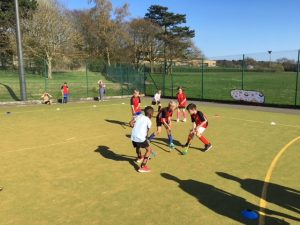