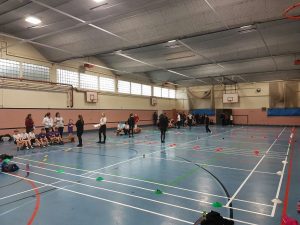 On Wednesday 11th of January 2017 North West Leicestershire School Sports Partnership held its annual Boccia competitions at Forest Way and Ibstock Community College. As in previous years this competition continues to grow with 9 schools attending along with 128 children. Although this competition had a primary focus of enjoyment, exploring a new sport and inclusivity there were some very hotly contested games that resulted in Holy Cross winning the morning session with New Swannington and Broom Leys finishing joint runners up and Forest Way in fourth.

The afternoon session saw teams from Ellistown, Woodstone, Willesley, Woodcote and Thringstone compete at Ibstock Community College. Leaders from Ibstock CC officiated the games which saw the largest turnout to date. After all games had been played Thringstone 3 and Woodstone 2 were declared joint winners with Woodstone also claiming 3rd and 4th place.

Over the course of the day School Sports Partnership staff and young leaders kept an eye out for teams that showed the school games values of Determination, Passion, Respect, Honesty, Self-Belief and Team. It was great to see these values being shown by all who attended, however Thringstone and Broom Leys were selected to receive the Spirit of the Games Awards. They will now receive a framed Spirit of the Games certificate and be added to the list of school competing for the overall prize of a bag of sports equipment.

Thank you to everyone for attending and helping to make the competition a great one. A special thank you to Forest Way and Ibstock CC for allowing us to use their facilities and providing leaders.