It’s been a busy week of dodgeball as a total of 50 teams took part in 5 events.

Woodstone were the hosts for the first competition on Monday as two teams from the school took on teams from Viscount Beaumont and Packington. The home teams had a successful day, both recording wins against the visitors but when they came up against each other, in what proved to be the deciding match, the year 5 team beat the year 6 team to claim overall victory.

The other event on Monday was a development competition at Ibstock Community College. Children from 13 schools were mixed up and randomly allocated to teams. For many of them dodgeball was a relatively new sport but they were able to have a go, meet some new people and have a lot of fun! Whilst the focus of the day was on participation, congratulations should go to team 7 who won 5 out of 5 matches!

On Tuesday there were 2 competitions taking place. At Newbridge, 10 teams competed across 3 pools, all playing at least 3 matches. In Pool A, Hugglescote 1 were undefeated and took top spot ahead of runners-up, All Saints 2, and Sir John Moore 1. Belvoirdale 1 were the top team in Pool B ahead of Hugglescote 2 and Sir John Moore 1. Swannington, Newton Burgoland, All Saints 1 and Belvoirdale 2 were all in action in pool C. All Saints and Swannington won 2 matches each and drew with each other to make it very close at the top of the group. All Saints 1 progressed as group winners thanks to their superior point’s difference but Swannington also made it to the semi-finals as the best runners up. The two teams actually faced each other in the next round and it was All Saints who made it to the final with a 2-1 win. They were joined in the final by Hugglescote 1 who beat Belvoirdale 1 in the other semi-final. It took extra-time in the final to decide the winner but it was eventually Hugglescote who came out as winners. The young leaders at the event nominated Belvoirdale as the spirit on the games winners for their attitude and behaviour throughout the event.

At Castle Rock, another 12 teams were battling it out. There were successes for a number of teams, particularly Warren Hills, Griffydam 2, Broom Leys 2, Woodcote 1, Albert Village and Worthington. After a hard-fought group stages, Broom Leys 2 faced Woodcote 1 and Albert Village played Griffydam 2 with Broom Leys and Griffydam coming out on top. Credit should also go to Woodcote who won the spirit of the games award on the day.

The final primary competition of the week took place at Ibstock on Wednesday and it was the closest competition of the year so far! 8 of the 12 teams won at least 2 matches so there was plenty of maths to do to work out who progressed from the group stage. In Pool A, Ashyby C of E 1, Dovebank and Whitwick St John 2 all won 2 matches with Dovebank pipping the others to the top spot thanks to winning more individual games. Ellistown won all 3 of their matches in Pool B to win the group ahead of Ashby C of E 2 who finished in second place. After all the matches in Pool C, Moira 1, Whitwick St John 1 and Ibstock Junior 1 had all won 2 matches, won 6 games and lost 3 games. Ibstock ended up as group winners as they had lost the fewest players throughout the competition. Whitwick St John also progressed to the semi-final as the best runners-up.

Ellistown beat Dovebank in the first semi-final to set up a meeting with Ibstock Junior 2 who beat Whitwick St John. In the final, it was Ibstock who triumphed as they recorded a 2-0 win against Ellistown. The spirit of the games award went to Moira who played with honesty throughout the day and bounced back from their disappointment of missing out on the semi-finals by arranging friendly matches with other teams at the end of the evening.

As ever, we want to say a big thank you to everyone who made the events possible. To Woodstone, Ibstock, Castle Rock and Newbridge who hosted competitions. To the Young leaders from Ibstock, King Edward VII and Newbridge as well as all the teachers and support staff from the Primary Schools who all ensured the smooth running of the events. 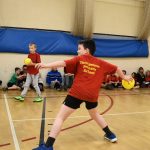